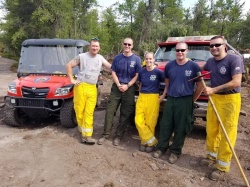 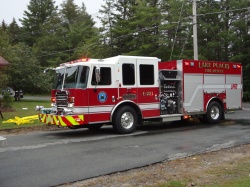 LAKE PLACID — An electrical fire was contained to one dormitory room at Northwood School Tuesday after smoke filled the second floor of a residential wing and forced students and faculty to evacuate.

Firefighters and school administrators said it seems the fire was caused by an electrical overload in a second-floor dormitory room, occupied by a student at the time of the incident. Assistant Head of School Tom Broderick said the resident of the room was on a free period and used a fire extinguisher to knock down the flames, with several Northwood faculty members soon responding to aid in putting out the fire.

The student suffered a burn to his hand and was transported to Adirondack Medical Center, according to Broderick and Matt Colby, head driver for the Lake Placid Volunteer Fire Department.

“It’s superficial,” Broderick said of the student’s injury. “He’s at the hospital right now. He was in the room when it happened, charging whatever he was charging.”

One or more Essex County fire investigators will determine what started the blaze, but Broderick said, “We think we had an electrical overload on the electrical circuit.”

“We’ve got county fire investigators coming to verify what we’ve found so far,” Colby said at about 2 p.m. “We used one fire extinguisher; the staff knocked a lot of it down. We used smoke ejectors to get the smoke out. It burned a lot of plastic, fiberglass, remote-control cars. (We’re) narrowing it down to that area.”

At the time the fire broke out, tents were being set up in athletic fields at the front of the school for a commencement ceremony, as Northwood’s seniors graduate this weekend. 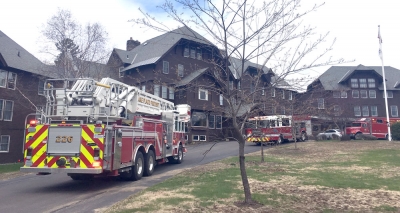 This site has been viewed 283,517 times.
News
Events
Pictures
Apparatus
Maintained by the members and staff of Lake Placid Fire Department. Designated trademarks and brands are the property of their respective owners. Copyright © 2006-2021. YourFirstDue Inc. All Rights Reserved. Content on this web site is supplied by Lake Placid Fire Department. YourFirstDue Inc. cannot be held responsible or liable for any content, text, pictures, or any other media found on this web site.
Management login
Powered by