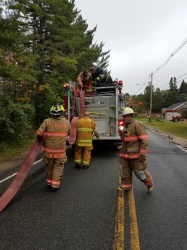 LAKE PLACID - A small fire started inside a Main Street building Tuesday morning, Dec. 31, and extended to the second floor before being extinguished.

Firefighters pushed forward and located a fire on the first floor of the building that had extended to the second floor, Marshall said.

"It was just a small fire, nothing big," he said. "It got put out, we did a full search of the building and found the fire didn't extend anywhere else."

The Lake Placid Volunteer Ambulance Service was on the scene, but it's unclear if anyone was injured. The cause of the fire was also unclear Tuesday morning.

The Lake Placid fire department called the Saranac Lake Volunteer Fire Department for mutual aid. Both departments were still out of service as of 9:30 a.m.

The Main Street business district, from the Saranac Avenue intersection to the Post Office, was blocked off to vehicle traffic Tuesday morning. Firefighters and officers with the Lake Placid Police Department redirected cars back onto Saranac Avenue, onto Mirror Lake Drive and farther down Main Street toward the Olympic Center.

Meanwhile, pedestrians continued to walk Main Street like any other morning.

Groups of pedestrians - some carrying shopping bags, others cups of coffee - meandered past the cluster of fire trucks and firefighters in full gear, stepping over hoses. Some people stopped to watch the firefighters work. Others just kept walking.

(From the Lake Placid News)

This site has been viewed 283,525 times.
News
Events
Pictures
Apparatus
Maintained by the members and staff of Lake Placid Fire Department. Designated trademarks and brands are the property of their respective owners. Copyright © 2006-2021. YourFirstDue Inc. All Rights Reserved. Content on this web site is supplied by Lake Placid Fire Department. YourFirstDue Inc. cannot be held responsible or liable for any content, text, pictures, or any other media found on this web site.
Management login
Powered by