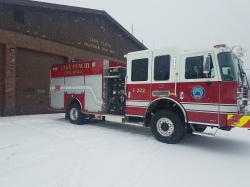 A camp on the west shore of Lake Placid burned to the ground Sunday night, according to the Lake Placid Volunteer Fire Department.

Called Camp Happy Hours, it was used as a vacation rental and has its own website, www.camphappyhoursny.com. It has been owned since 2016 by Stacia and Michael Takach, who also own the Stagecoach Inn and a rental cabin called the Bear Den in Lake Placid.

“The camp was a total loss,” fire Chief Douglas “Torry” Hoffman said Monday. “By the time we got there, it was completely on the ground.” The only pieces of the structure left standing were the chimney and the concrete pillars on which the waterfront house had sat.

The blaze would have been spotted sooner at a time of year when more people were around, Hoffman said. But the large lake is still frozen, and no one is at the boat-access-only camps like this one, halfway up the western shore. The people who spotted the flames and called the fire department were way down at the Lake Placid Lodge, about a mile-and-a-half away in the lake’s southwest corner, he said. When he arrived at the Lake Placid Lodge, “You could clearly see the glow of what appeared to be a structure fire from that location,” he said.

“By the time that anybody noticed this fire, it was long into the progression.”

“When the call came in, we weren’t sure where the fire was,” fire driver Greg Hayes said. Therefore, they sent trucks to two different locations: the area around the Lake Placid Lodge and to the state boat launch in the lake’s southeast corner.

The LPVFD has fire boats, but they are not yet in the water since the lake is still frozen. What was needed was an airboat, which hovers on an inflatable cushion and is propelled by a large fan. The Lake Placid fire department doesn’t have one, by the neighboring Saranac Lake Volunteer Fire Department does, so it was called for and deployed.

The airboat could safely carry a maximum of six people at once, including the pilot, Hoffman said.

Once firefighters arrived on site, “We basically extinguished what was still burning using portable water pumps, drawing water right out of the lake,” Hoffman said. “It had spread. It burned a couple trees.”

Hoffman guessed that recent rainfall and snowmelt running off of Moose and McKenzie mountains prevented a full-on wildfire, “but the trees that were right next to the structure were heavily burnt.”

He said he saw no evidence that anyone had been at the site recently.

By the time the firefighters had mopped up the blaze and returned across the lake to their firehouse, it was 3 a.m.

On Monday, Hoffman said, the LPVFD returned to the scene with investigators from Essex County Emergency Services and the New York State Police.

“There’s nothing left to really try to investigate it,” he said, but they gathered what evidence they could and turned the case over to State Police.

Reached by phone Monday afternoon, Stacia Takach said she was in the middle of dealing with the fire investigation and couldn’t speak publicly yet.

Lake Placid is ringed with camps: some large and ornate, some small and quaint. This was closer to the latter; Essex County property records show the main building of Camp Happy Hours had three bedrooms and 1,540 square feet of living space.

Fires are rare at these camps. Hoffman said he doesn’t remember fighting one before in his 20 years on the fire department. 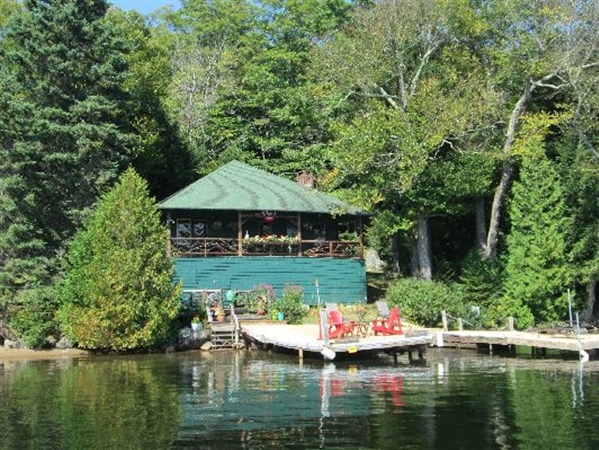 Camp Happy Hours is seen on the shore of Lake Placid in this photo from Essex County property records.
×

This site has been viewed 283,518 times.
News
Events
Pictures
Apparatus
Maintained by the members and staff of Lake Placid Fire Department. Designated trademarks and brands are the property of their respective owners. Copyright © 2006-2021. YourFirstDue Inc. All Rights Reserved. Content on this web site is supplied by Lake Placid Fire Department. YourFirstDue Inc. cannot be held responsible or liable for any content, text, pictures, or any other media found on this web site.
Management login
Powered by